Around the country, most people are still anxiously awaiting the first snowfall of the season. Here in Minnesota, we have not had that problem. We’ve been getting snowfall right on schedule, occasionally even having to declare snow emergencies. To keep up with demand while also preparing for eventual winter weather elsewhere in the nation, the DOT has unveiled a new type of snow plow to increase efficiency and get roads cleaned much faster. 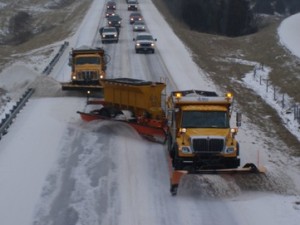 Unlike normal snow plows, the aptly named “Tow Plow” brings together two plows that can clear multiple lanes using just one driver. There is one truck in the front, which pulls another plow trailer behind it. The second plow is maneuvered so that it moves forward on a diagonal in the next lane. From behind, it looks like a an accident waiting to happen as the truck appears to be jack-knifing – but drivers can rest assured that it’s supposed to operate that way. And a wing can also be added to the left side to clear snow and sleet from the shoulder, essentially doing the job of three vehicles at once.

A number of states have already begun rolling out the Tow Plows, and more will likely follow suit in the coming months and years. In addition to clearing two lanes of traffic with just one truck, the plows also spread salt and/or brine on roads. And because the second trailer has no engine and uses no fuel on its own, these plows actually save fuel and cut down on emissions that would normally be created from operating two separate plow trucks.

We’re excited to see new technologies improving winter infrastructure, and look forward to seeing these Tow Plows in person. What other technologies have you seen on the road lately? Let us know on Twitter.